The topic of mild traumatic brain injury and/or concussion has been in the news for several years. The release of a major motion picture, a concussion sustained by a professional sports star, or the passage of a law tends to rekindle interest in the topic. Recently, another issue was linked to concussion — the concern of suicide. But, I am optimistic. Why? By nature, I’m an optimist, but I’m also hopeful that parents, community leaders and politicians will pay attention to the epidemic of suicide in our country.

When I worked in the U.S. Navy, one of my careers was serving as their Suicide Prevention Program Coordinator. Every death by suicide crossed my desk. The number of Marines and Sailors who attempted and completed suicide staggered me.

In our country, the number of people — servicemembers or civilian — who die by suicide is almost too much to comprehend. Compared to 16,000 homicides each year in the U.S., the number of suicides is nearly double that at almost 32,000 a year, most due to untreated depression of some form.

Let’s put those numbers in another perspective: In the last decade of our troops fighting in Afghanistan and Iraq, just over 7,000 Americans have made the ultimate sacrifice and almost 50,000 have been wounded. During that same time, more than 300,000 have died by suicide and more than 50,000 have been children between the ages of 14 and 24. The number of suicide attempts is in the millions.

Researchers are also finding out that some of the consequences of concussion are linked to depression and suicide. Untreated brain injuries can lead to devastating consequences.

My optimism lies in the hope that coaches, parents, athletes, and community leaders understand that the physiology of a concussion caused by a blow to the head or body prompts the neurons to function ineffectively due to a disruption of their normal chemical process.

I’m optimistic that these same parents, coaches, athletes, and community leaders will make the connection that the neurological process of a concussion is to depression. That these neurons which govern our emotions and self-esteem for a variety of different reasons — the death of a loved one, loss of a job, bankruptcy, medical conditions — can lead to a disruption of the neurons and cause depression leading to suicide.

I’m optimistic that the people who form every individual’s support system, from parents and teachers to friends and fellow athletes, will ACT if something seems amiss:
A — ask an individual if he or she is thinking about suicide
C — let him or her know you care about them
T — get the individual to treatment with someone who specializes in suicide evaluations: a counselor, pastor or chaplain, family doctor or pediatrician, psychologist, or psychiatrist or local emergency room 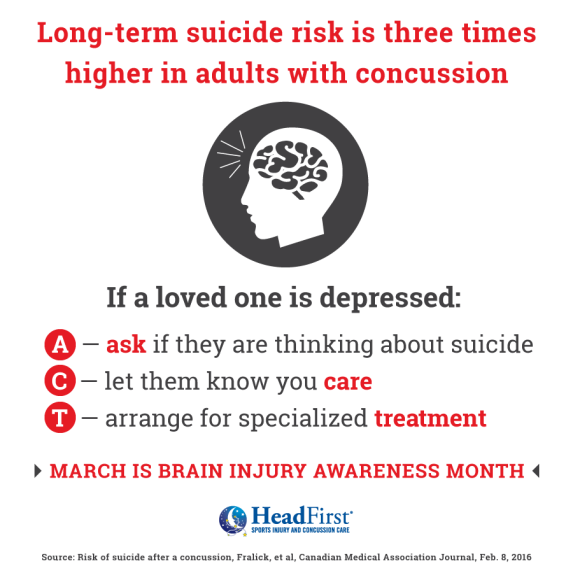 I’m optimistic that people will realize that depression can be considered the “common cold” of psychiatric conditions and has a variety of effective treatment options.

I’m optimistic that people will pass on the suicide prevention hotline number and website to those in crisis: 1-800-273-TALK and www.suicidepreventionlifeline.org.

And finally, I’m optimistic that people will pass this blog and information onto at least FIVE other people and in doing so, might just save a life.